►  Irish immigration to America after 1845

The first wave of Irish immigration

Irish American history began in the late-16th century with the transportation of petty criminals and beggars to the West Indies. These transportees were subsequently joined by prisoners of war, deported in the middle of the 17th century following Oliver Cromwell's bloody conquest of Ireland, and forced to provide cheap (slave) labour to the Caribbean tobacco plantations.

The first significant wave of immigration from Ireland came in the 1720s. This period saw the arrival of the Scots-Irish, a term used in North America (but not elsewhere) to denote those who came from Ireland but had Scottish Presbyterian roots. 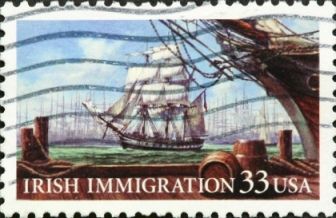 Philadephia was the most popular destination port for Scots-Irish immigrants to America, mainly because the linen trade routes were already well established. They then moved into the Appalachian regions, the Ohio Valley, New England, The Carolinas and Georgia.

Unlike the 19th century chapter of Irish American history, when Catholic Irish immigrants turned their back on the land, most Scots-Irish immigrants continued their farming traditions.

Despite the official line, small numbers of Catholics also arrived in this period. They sailed from the southern Irish ports of Cork and Kinsale and some settled communities in Virginia and Maryland.

The number of Irish immigrants rose and fell during these years. It was high in the late 1720s and low in the 1730s, before rising in the 1740s and continuing to grow until the 1760s when some 20,000 departed from Ulster ports alone.

From 1770 to 1774 the human traffic peaked with the arrival of some 30,000 mostly Scots-Irish immigrants in America.

Written by the creator of Irish Genealogy Toolkit and Irish Genealogy News, this 240-page paperback (publisher Penguin Random House) is full of essential advice and strategies for tracing your immigrant ancestors back to Ireland from America. Click/tap to find out more.

After Independence, the history of the Irish in the USA stepped up a pace with an estimated one million Irish immmigrants arriving between 1783 and 1844. The majority, at least until the 1820s, were artisans or professionals so they quickly assimilated and prospered. 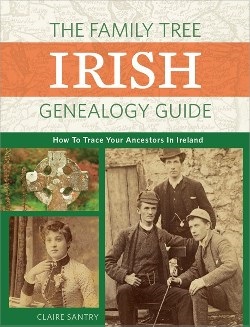 Written by the creator of Irish Genealogy Toolkit and Irish Genealogy News, this 240-page paperback (publisher: Penguin Random House) is full of essential advice and strategies for tracing your immigrant ancestors back to Ireland from America. Click/tap to find out more.

The letters they sent home told of comforts the average Irish family could only dream of. Soon, many more were saving for their fare.

This wave of immigration from Ireland saw the unskilled and illiterate arrive, ready to seek their fortunes, and many found employment as labourers on some of America's huge early infrastructure projects such as the Erie Canal.

While the pace of Irish American history cranked up a gear in the early 19th-century, it was nothing compared to the dramatic exodus caused by the Great Hunger (also known as the Irish Famine) of the late 1840s.

► Irish immigration to America from 1845

More than 36 million Americans identify themselves 'Irish Americans'. That's nearly 12% of the total population of the United States.

Below is a list of just some of the most internationally famous Irish Americans: