Irish Christmas traditions, like festive customs the world over, are not set in stone. They evolve over the generations, and not necessarily over very many generations, either. 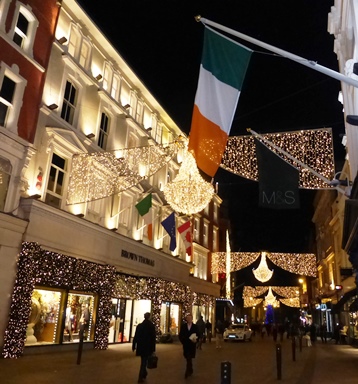 Longevity certainly wasn't a requisite feature of tradition for my Nana Tierney. Thanks to her, all my childhood memories of Christmas – which ought to be beautiful things – are set to a sound track of 'Oh come all ye faithful' mingled with 'I believe' by The Bachelors.

Nana insisted that, as Irish Christmas traditions went, you couldn't get better than The Bachelors. To this day, a big nostalgic lump gets stuck in my throat when I hear that wretched song (or anything else by the scrubbed up Brothers B) and imagine her, standing in front of the fire, skirt hitched up to warm the back of her thighs, singing along to 'Every time I hear a new-born baby cry....'

Not once did ANYONE dare point out that listening to records of The Bachelors could not have achieved the elevated status of Traditional in the early 1960s.

This recollection reflects a peculiarity about Irish Christmas traditions (and probably holds true for many other customs, too): that they can be traditions to individual families only, not necessarily entire communities or nations. Very often, the word 'traditional' means nothing more than 'what we did when we were young'. I suppose we hang on only to those family customs that carry the warmest memories and despatch the rest.

So it is that December 25th (and, in Ireland, the 26th - St Stephen's Day)  are days when families the world over play out their own versions of what went before. But there is also a core of seasonal traditions that nearly all Irish families and their communities observe to a greater or lesser extent.

This page is primarily about the pre-Christmas customs - the traditions that help to set the atmosphere of this magical time of year. But you can also follow these links to find out about traditions of specific days over the Christmas period, and how (get your appetite ready!) to prepare some of the delicious seasonal dishes that accompany them.

for many of our ancestors, Advent (the four weeks leading up to Christmas) began with a bucket of whitewash in hand. This annual painting of outhouses was one of the most popular of rural Irish Christmas traditions. It was carried out mainly by the men folk while the women scrubbed the interiors.

It dates back to pre-Christianity and is generally regarded as the ancient version of spring-cleaning, carried out prior to the Winter Solstice when daylight hours shrink to just under seven and a half hours. With the arrival of Christianity the tradition was rebranded as a homely preparation for the arrival of Mary, Joseph and the new-born baby, Jesus.

Some say that this whitewashing tradition continues in some rural areas. If it does, I don't know the family! Where it may survive in spirit is in the understandable desire to make the home clean and comfortable for family and friends who will visit during the holiday.

Candle at the window

This is one of the most well-observed of Irish Christmas traditions and has changed little over the years except in its increasing popularity. Just one candle used to be placed in a window as a sign of welcome for Mary and Joseph on Christmas Eve but it is common these days to see lit candles, usually electrically or battery powered, in all downstairs street-facing windows throughout the festive season. In some homes they are also placed in upstairs windows.

A holly wreath remains a popular front-door adornment and dates back to the days when most of our ancestors would have decorated their home with this freely available plant. 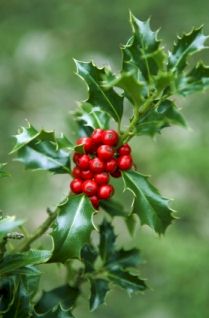 My dear cousin Mary, having lived through many austere years, was not one for over-doing the Christmas decorations.

The only hint of the season came in a single holly sprig, glossy and heavy with red berries, strategically placed on the mantal above the stove in her home near Bantry. 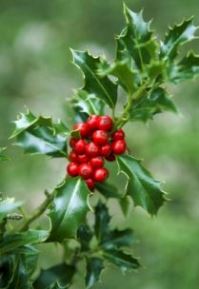 A holly wreath remains a popular front-door adornment and dates back to the days when most of our ancestors would have decorated their home with this freely available plant.

My dear cousin Mary, having lived through many austere years, was not one for over-doing the Christmas decorations.

The only hint of the season came in a single holly sprig, glossy and heavy with red berries, strategically placed on the mantal above the stove in her home near Bantry.

As a child, it was a treat to help her set it up and to choose where to place the shepherds, the sheep and the donkey (we didn't quite run to the three wise men). 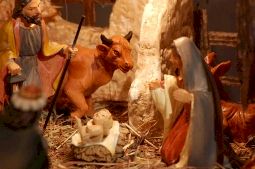 The placing of Mary, Joseph and the baby, Jesus, didn't require much creative direction, however. They got centre-stage on the straw-strewn miniature stable. Obviously.

I have a feeling that the crib in the home is one of the Irish Christmas traditions that may be on the wane. Not because the religious element of the festivities has been totally lost; Christmas remains essentially a religious holiday in Ireland.

Perhaps the little crib is considered clutter in homes that are often chock-a-block with people, presents, decorations and food at this time of the year.

Whether or not the crib-at-home is losing favour, there are often larger-scale cribs atmospherically lit up in town centres and there is certainly always one in every Roman Catholic church. There's even one to greet passengers as they step out of Dublin Airport's Arrivals Hall.

Attending Midnight Mass on Christmas Eve is probably the most widely practised of all Irish Christmas traditions. Usually the church will be crammed to the rafters with the largest single congregations of the year and it is a particularly social occasion, as families that have come together for the holiday meet friends and neighbours they may not have seen for a year.

Although midnight mass is a religious occasion, it is one that non-religious folk sometimes attend because they enjoy the chance to sing some carols, often accompanied by live music, to exchange Christmas greetings and to play their part in their local community.

The sending and receiving of festive greetings in paper format is hugely popular in Ireland. It isn't the oldest of Irish Christmas traditions by any means but there's an element to it — the inclusion of a long newsy letter, often with some recent photos — that I imagine is a throw back to the days of mass-emigration from the island.

Back then, a letter from a long-separated family member would have been the season's best present. A card, possibly bearing some essence of the foreign land from which it was sent, would have added an exotic touch.

The card would be placed on public display while the letter would be stored safely but readily available for regular re-readings.

Today, Irish Christmas cards remain big business with cards exchanged between work colleagues, neighbours and friends, as well as family members near and far. However, while the Christmas letter is still reasonably well practiced, it is waning. Who needs an annual letter when you're in regular contact with cousins via Facebook and other free and easy means of communication.

The same is true of cards. Environmental concerns, never mind the cost of postage, have halted the growth of the industry. A Twitter-shared Xmas Greeting is just not the same!

The tree and the tinsel

Decorating a tree in the dead of winter was a Pagan custom that has survived with little variation except that the dressed tree (now draped in tinsel) makes its appearance earlier and earlier each year! As with the rest of the decorations, they are now put up in many homes and offices at the beginning of December and remain in place until the 6th of January.

This business of decorating the home with tinsel, fairy lights and festive ornament is a relatively recent phenomenon (especially when they are festooned all over the front of a house). Before the 20th century, it was only shops, churches, and the homes of the gentry that were decorated so lavishly. The ordinary family made do with holly and mistletoe.