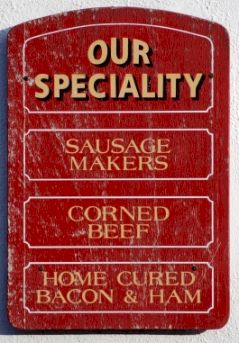 For most people, the mention of traditional Irish recipes conjures up visions of Irish stew, boiled bacon with cabbage and warm rounds of soda bread. These wholesome foods have been around a long time and they still make regular apppearances on the tables of most families in Ireland.

Of course, the Irish cook is not limited to these well-known dishes. There are many, often more sophisticated, specialities that didn't achieve fame despite passing down the generations. Those recipes now adorn the glossy pages of countless cookery books, together with a vast selection of modern recipes demonstrating Ireland's new culinary tradition.

But for family historians, the original cooking methods and ingredients used by our ancestors are of most interest.

I am planning to create a free pdf e-booklet of Irish Traditional Food recipes. Due to current family commitments, I can't promise when it will be finished but when it is ready, it will be downloadable from this page.

In its current draft format it holds recipes for the following dishes (but more will be added):

Until the ebooklet mentioned above is published, you can view these not-so-traditional but definitely Irish recipes:

Until the ebooklet mentioned above is published, you can view these not-so-traditional but definitely Irish recipes:

Turkey was introduced to Ireland in the late 17th century, only becoming the meat of choice for celebrations three centuries later.

Until then, goose was the preferred dish for special occasions. In the early years of the 19th century roasted goose appeared on Irish tables three times a year:

At Christmas the goose was usually accompanied by beef, especially Spiced Beef, which was considered a great luxury until well into the 20th century.

► Colcannon. Sometimes, nothing else will do

► Colcannon. Sometimes, nothing else will do

It hasn't been around long enough to have earned the distinction of 'traditional', but Baileys is synonymous with the Emerald Isle because its cream comes only from Irish milk.

So, if you're looking for the kind of Irish dessert recipes that are full of the flavour of Ireland, you'll love a Bailey's Irish cream cheesecake.

Breakfast is known as the Full Irish in the Republic of Ireland and as the Ulster Fry in Northern Ireland.

Both are likely to feature soda farls.