The Quakers of Ireland have left wonderfully rich and complete records

In 2014, Irish Quakers celebrated the 360th anniversary of the opening of their first Meeting House. This was in Lurgan, County Armagh, and it took place just one year after the first Quaker in Ireland, William Edmundson, had himself been converted to the principles of the Friends.

Edmundson has become known as the Father of Irish Quakers and it is largely due to his organisational efforts that today's genealogists have such rich pickings to discover.

Much to the delight of Quaker genealogy researchers, the majority of these records go back to 1655 or the 1670s, and most continue up to the present without a break.

They are not really like parish registers, though. The main business of the meetings was "to take care of the poor, the fatherless and the widows; to see that marriages were properly solemnised and to watch over the moral conduct of members." The entries do not, therefore, usually contain much more than the names and addresses of the parties concerned.

However, because all Irish Quakers' communities were self-contained, it is usually relatively easy to work out the family connections of the individuals named in the reports. I say 'usually' because some marriages attracted dozens of witnesses and the relationships can take some time to decipher.

It's an additional plus for genealogists that the records of this group are not split between countless repositories.

There are just two regional archives:

In addition, both the National Library of Ireland in Dublin and PRONI in Belfast have some copies of these records. So, too, does the LDS Church (Mormons).

Links to these sites are in the Resource Box on the main Irish Church Records page, as is a lot of general information about using religious records for genealogical research.

FindMyPast Ireland is, at April 2018, the only online source of Irish Quaker records.

The holding is extensive, and includes baptisms, marriages, some deaths, congregational (parish/social/family issues), migration and school records, plus a complete run of 65 editions of the Annual Monitor of the Quakers for Great Britain & Ireland from 1813-1918.

There are 65 publications in total, broken up by years.

The Quaker village of Ballitore

Wool and floor mills were built to provide work, the rich farmland provided food, and a school was established in 1726 by Abraham Shakleton (an ancestor of the Antarctic explorer Ernest Shackleton). 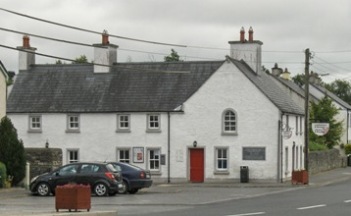 Over the years the school gained such a reputation that even Protestant and Catholic parents sent their children to be educated there. Among its alumni was Edmund Burke, the famous political philosopher.

Today the little village still attracts those that want to learn about the Quakers in Ireland.

It has several restored historical buildings and a Quaker burial ground but the gem is its small museum, which contains many artefacts relating to local Quaker history.

The Quaker museum is free to visit and its opening times are:

More about the early Irish Quakers

Born in 1627, William Edmundson was an English carpenter turned Cromwellian soldier who set up a shop in Antrim Town with his wife and brother John in 1652.

On a stock-buying visit to England the following year, William went to hear George Fox and James Naylor speak. Convinced by their arguments, he returned to Ireland a changed man and in Spring 1654, he moved with his wife and John from Antrim to Lurgan, where they kept a shop and grazed cattle on their own land. Having adopted Quaker customs, the family were soon experiencing social ostracism and worse.

He was imprisoned on many occasions during his lifetime, as were many other Irish Quakers. Among them were two determined Quaker women from England, Elizabeth Fletcher and Elizabeth Smith. They were incarcerated for preaching in the Church of St Audeon in Dublin and later held the first Dublin meeting of the Friends at the house of Richard Foukes, a tailor, near Polegate.

Shortly afterwards, they became the first Quakers to arrive in Cork, where William Penn, the son of an English Navy Admiral, was subsequently converted.