The song Molly Malone is not just the 'anthem' of Dublin and the city's sports supporters. It has become famous throughout the world.

It tells of a Dublin long gone, when street vendors plied their trade from a barrow having collected their produce from the early morning markets. 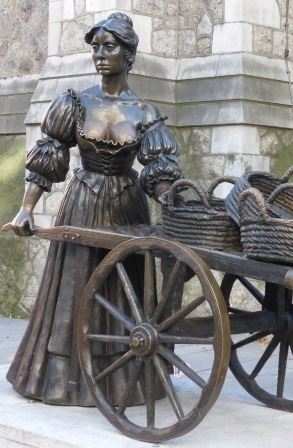 Molly Malone with her wheelbarrow in Dublin 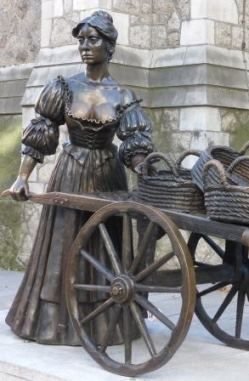 In Molly's case (had she lived) she would have selected her cockles and mussels from the bounty landed at the city's quayside each morning, placed them in baskets on her barrow, and set off on her rounds.

She would probably have followed specific routes on certain days, and her customers would have listened out for the calls that announced her arrival in their locality.

There is no evidence to suggest that Molly was a real person. Countless people, including academics and genealogists, have tried to find proof of her existence. None has been found.

Molly Malone on the move

Having been located at the busy junction of Nassau Street, Suffolk Street and the pedestrianised shopping mecca of Grafton Street since 1988, Molly found herself in the way of a planned cross-river tram (luas) route. In April 2014, she had to pack up her barrow.

In typical Dublin form, there's a good clutch of nicknames for 'Our Molly'. She's a popular lass, all right, but there's a certain theme running through these names which suggest she's not necessarily the kind of girl you take home to meet your Mam.

Here are a few of the better known names:

*  The tart with the cart

*  The dolly with the trolley

*  The flirt in the skirt

*  The dish with the fish

*  The trollop with the scallop

The opportunity was taken to give her some tender loving care from specialist bronze restorers. Suitably refreshed, she wheeled her wares into a new temporary spot on Friday 18 July 2014.

You'll find her outside the city's Tourist Office in St Andrew's Church, Suffolk Street, about 150 yards away from her old home. The photo above was taken there.

She's still there after more than five years,  even though the plan was for her to become a permanent resident of Grafton Street in 2019.

Maybe she'll stay put for a while longer. Given the proximity to the Tourist Office, and the fact many guided tours of the capital start and end beside her cart, it would make sense to make this her permanent home. Time will tell.

In the meantime she remains a very popular landmark of Dublin, much photographed and, er, cuddled.

There's no evidence that Molly was anything other than a figment of the songwriter's imagination. But just for a bit of harmless fun, I took a rummage in the 1901 census (this is the oldest surviving complete Irish census) and found two Molly Malones listed.

Neither of these two girls lived in Dublin. One is from rural county Clare, the other from the city of Limerick.

Nor is there any hint that either is the daughter of a fish-monger. The first girl is the second daughter of a Grocer. The other girl is a visitor to the household of a labouring family.

Of course, it's perfectly possible that 'our' Molly Malone had already succumbed to her fever by 1901...

In July 2010 came news that casts Dublin's favourite fishmonger in a different light to the virtuous young girl of the famous song.

An earlier version of the song, perhaps as much as 100 years older, was discovered in a late 18th-century book containing a collection of popular theatre songs.

In this older version, there are no cockles and mussels. Indeed Molly isn't even a fishmonger, and she doesn't die of a fever, either. Instead, she's the kind of girl that makes the singer very happy in the evening.

"Och! I'll roar and I'll groan,
my sweet Molly Malone
Till I'm bone on your bone
and asleep in your bed."

From the 'new' lyrics, it's hard to tell if the object of his interest returns his affections. He also sings:

"It's myself I'll soon smother
In something or other
Unless I can bother Your heart to love me."

The book in which the lyrics were found, Apollo's Medley, dates from 1790, but the song may be considerably older.

The discovery, by a bookshop owner in Hay-on-Wye on the Wales/England border, certainly raises questions about the busty fish seller chosen as the focus of Dublin's millennium celebrations in the summer of 1988.

Perhaps the nicknames are closer to the mark, after all!

In typical Dublin form, there's a good clutch of nicknames for 'Our Molly'. She's a popular lass, all right, but there's a certain theme running through these names which suggest she's not necessarily the kind of girl you take home to meet your Mam.

Here are a few of the better known names:

* The tart with the cart

*The dolly with the trolley

* The flirt in the skirt

* The dish with the fish

* The trollop with the scallop