The Northern Ireland map below shows the province of Ulster as it was in 1848, at the height of the famine that brought unbearable suffering to millions of people.

Death and emigration caused the population to shrink dramatically. Some counties, especially the more rural, have a considerably smaller population density in the 21st century than they did in 1841.

Even allowing for later migration to cities, the figures tell the tale of a devastated population. 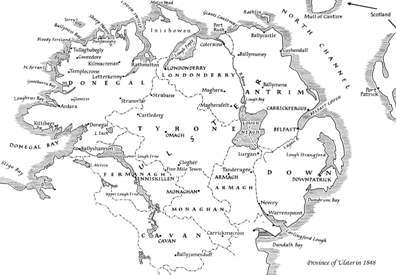 Northern Ireland map showing the province of Ulster in the famine year of 1848. Click for enlarged image.

The province of Ulster

In 1922, the island of Ireland was divided into two entities. The process is usually referred to as 'Partitition'. Six counties in the province of Ulster became a separate and distinct part of the United Kingdom - Northern Ireland - while the remaining 26 counties (including three from the province of Ulster) became what is now the Republic of Ireland. In the early years following partition, the 26 counties were referred to as the Irish Free State.

This is how the nine historical counties were 'distributed':

When conducting Irish family history research it is important to make the distinction between the two political states because some records are held in Belfast and others in Dublin. Knowing in which state your ancestors' county now lies can save you valuable research time.

February 2020: Northern Ireland's statistical office no longer collects data on a county basis, so the table above cannot be repeated with more up to date information. The latest population figures for Northern Ireland are from the 2012 census which counted 1,810,863 inhabitants, and mid-2018 when the official estimate was put at 1,881,641.

► All-Ireland geography facts, and a map of the entire island.

North of Ireland population in 1831

The figures below relate only to the collective totals of the six counties now in the UK ie they do not include Cavan, Donegal or Monaghan.

Along the way, it visits all six of the Northern Irish counties.

It crosses the Mourne Mountains, the World Heritage Site of the Giant's Causeway, Lough Erne, Cavehill and the Sperrin Mountains, and skirts the city of Belfast.

More about the Ulster Way.