An overview of Irish immigration to Scotland during the 19th century

Irish immigration to Scotland was part of a well-established feature of early 19th century life in Ireland: the annual harvest migration. Since Scotland was Ireland's closest neighbour (only 13 miles separate the two countries at one point), it was an obvious choice for those who lived in the north of the island. 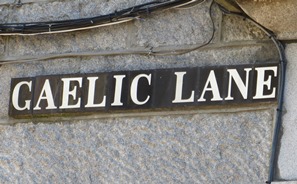 In the 1820s, up to 8,000 economic migrants crossed back and forth across the Irish Sea every year, bound for seasonal agricultural work or other temporary contractual work in northern England, Wales and Scotland.

By the early 1840s, the number making the harvest migration alone had risen to about 25,000.

Permanent settlement usually required a greater skill base than agricultural labourers held. Most of the non-harvest migrants came with highly valued textiles and jute knowledge and came from the Irish counties where linen and yarn were produced: primarily Derry, Donegal, Monaghan, Sligo and Tyrone.

These early trickles of Irish immigration to Scotland do not conform to the stereotypes of migration in later years which were largely about the arrival of unskilled and destitute people.

While most of the temporary migrants and probably a small proportion of the skilled workers eventually returned home to Ireland, some chose to settle permanently.

This was more likely to happen in Scotland than in England or Wales, possibly because of the strong cultural ties between Scotland and Ulster, the province which provided most migrants to Scottish industries, especially in textiles. 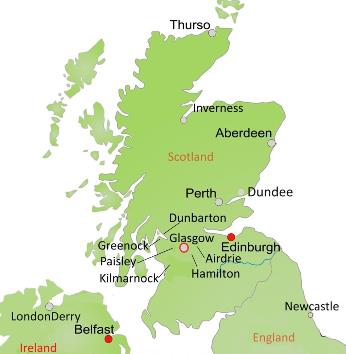 Map of Scotland showing major destinations of Irish immigrants in the C19th.

Up to the 1830s, Scotland could offer if not rich pickings, at least a chance of a regular wage. The country was experiencing a boom in the construction of homes, factories, roads, canals and other infrastructure while the coal, textile and steel industries were also increasing production. Whole towns grew up to provide a workforce to some of these industries and saw the development of significant Irish communities within them.

In Girvan, Ayrshire, for example, some three-quarters of the 6,000 population was Irish-born in 1831.

The Great Famine (1846-50) exodus from Ireland saw the poor and starving arriving in Scottish ports in desperate straits. By 1851, the Irish-born population of Scotland had reached 7.2%.

(Irish-born as % of total population)

They were found in greatest numbers in Glasgow, Dundee, in the mining communities of the Lothians and in Airdrie, Coatbridge and Motherwell.

These migrants came at a time when many Scots were emigrating to England, where wages were higher, or to more distant parts of the British Empire, looking for greater prosperity. As they left, they created work for the Irish, who went on to sustain Scotland's industrial revolution.

They were especially famed as navvies building canals, bridges, railways and ports.

While the significant minority of Irish Protestants (about a quarter of the total who arrived in the late 1840s) found it relatively easy to settle in Protestant Scotland, Roman Catholics had a rougher ride.

Anti-Catholic Scots were active in the Scottish Reformation Society and sometimes caused riots (as in Greenock in 1851). This mid-century tension may have encouraged the setting up of distinct Irish Catholic communities, often based around the growing number of Catholic churches.

In Dumfriesshire and Galloway there are plenty of Irishmen ready to take the bread out of the mouths of our own poor. An Irishman who lives in a hovel, feeds on potatoes and neither clothes or educates his children, can always work for less than a Scot. There are too many people who employ only the cheapest workers and do not think of the consequences.

In our opinion, the Irish have as much right to come to our country to better their lives as the Scots and English have to go to Ireland or any other part of Britain for the same reason. Let us hear no more complaints about the influx of Irish having a bad effect on Scotland unless it is to do something about tackling the problems which causes the emigration.

In Dumfriesshire and Galloway there are plenty of Irishmen ready to take the bread out of the mouths of our own poor. An Irishman who lives in a hovel, feeds on potatoes and neither clothes or educates his children, can always work for less than a Scot. There are too many people who employ only the cheapest workers and do not think of the consequences.

In our opinion, the Irish have as much right to come to our country to better their lives as the Scots and English have to go to Ireland or any other part of Britain for the same reason. Let us hear no more complaints about the influx of Irish having a bad effect on Scotland unless it is to do something about tackling the problems which causes the emigration.

Through fund raising, Catholic organisations were established to help the poor and Catholic schools were founded. While these self-help efforts are applaudable in many ways, they raised ethnic awareness and had the longer term effect of keeping the community separate and delaying integration.

While negative perceptions of Irish immigration to Scotland diminished as the century moved on, they did not disappear altogether.

Employers generally had no opposition to this source of cheap labour but, just as today, whenever the economy dipped, anti-immigrant feelings rose, and the hate-fuelled and cruel sterotype of the 'savage Irish' would be wheeled out for another airing. The Irish were a handy scapegoat for all Scotland's ills.

Even in the 1870s, the Registrar General, William Pitt Dundas, claimed that Irish immigration to Scotland 'had undoubtedly produced deleterious results, lowered greatly the moral tone of the lower classes, and greatly increased the necessity for the enforcement of sanitary and police precautions wherever they have settled.'

Irish immigration to Scotland: Second half of 19th century

As the 19th century wore on, Irish immigration to Scotland continued. By the end of the 1860s, the Irish had reached every county even the distant islands of Shetland and the Registrar General reported in 1871 that 'in six counties, five of which are on the western side of Scotland (and nearest Ireland), the proportion of Irish-born in the population exceeds the mean of Scotland'. The mean by this time was 6.2%.

But the main areas of settlement were the western Lowlands and the central belt.

While the proportion of Irish was pushing towards 20% in some cities, very few had penetrated the Highlands or reached Aberdeenshhire or the islands. And this pattern of settlement continued to the end of the century.

(Irish-born as % of total pop)

(Irish-born as % of total pop)

Irish immigration to Scotland: where to find records

Scotland's main genealogy resources are in good shape. Civil registration, church registers and census records are readily available online, for a fee. More localised or specialised collections can be harder to locate and are less likely to be online.

The following list is not intended to be exhaustive but it will help any researcher unfamiliar with Scottish family history records to get started.

• Birth, marriage and death - civil registration: Compulsory registration began in Scotland on 1 January 1855, which is 18 years later than south of the border. However, the Scottish system is different and includes genealogical data that makes the researcher's heart sing!

• Census returns: Censuses were held in 1841 and every ten years since then (except 1941). They record every man, woman and child in every Scottish household on a specific date and, from 1851 onwards, can be particularly useful for identifying a county or townland of origin in Ireland. The 1841 is of less value in this regard because the question asked only whether a person was born in the county of residence, or in Ireland, Scotland or Foreign Parts. From 1851, the chance of finding a more specific place of origin starts to get better and improves with each decennial record. Nonetheless, many researchers will not find this crucial information in the census returns. See 'No Passenger Lists'.

• Family History Societies: Scotland has a very strong network of local family history groups. Some cover cities. Some cover counties. Join or at least monitor the family history society that covers your geographical area of interest. Even if local collections are not online, these societies can be enormously helpful to your genealogy research. Find a Scottish genealogy society.

• See the Irish immigration to Britain page for a wider overview of movement across the Irish Sea.

• Return from Irish immigration to Scotland to the main Irish emigration menu.

The complete lack of ship passenger lists presents a major problem for family historians trying to work back to Ireland from a family line that settled in Scotland.

Most genealogy resources in Britain won't provide specific details of where in Ireland their immigrant ancestor came from. They'll just record 'Ireland'.

In the absence of passenger records detailing a last place of residence, the researcher is in difficulty because to make progress with Irish genealogy records it's essential to know a geographical place of origin.

Failing that, there are a number of techniques that may help you locate the county or town where your ancestors came from. The first is to examine the census records not just of your direct ancestors but of any family members and their Irish born offspring. You should 'follow' each of these individuals through each subsequent census in the hope that they eventually reveal a more specific place of origin.

If this option has been exhausted, the census details of your ancestors' neighbours should be studied. People tended to migrate in clusters; one group would leave, and then write home positively about job opportunities for friends and family, who would then set off to join them. This is known as Chain Migration. While there is no guarantee that your ancestor was originally local to all his new neighbours, chain migration research may help you narrow down at least a county for further research.

More options and techniques for identifying your ancestor's place of origin.