The Irish ring of friendship and love

The traditional Irish ring is widely known as the Claddagh ring since it is thought to have originated in the Galway fishing village of this name. 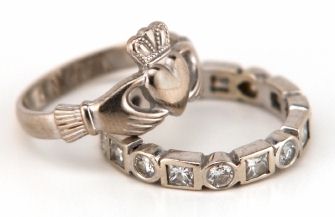 The exact history of claddagh rings has not been established, but its design is usually attributed to either a 17th century advernturer-turned-jeweller called Richard Joyce or a Margaret Joyce (not related) who was rewarded for her great works of charity when an eagle dropped an Irish ring into her lap.

All that can be said with any certainty is that the Claddagh ring is a type of 'fede' ring.

Fede is Latin for loyal or true, and rings carrying this message through the emblem of clasped hands date back to Roman times. They were especially popular as betrothel rings between the 12th and 17th centuries.

The meaning of the claddagh ring

The original meaning - of fidelity and trust - remains at the core of the Irish ring.

Unlike the oldest European fede rings, however, it does not feature two right hands. Instead, two hands (one right, one left) hold a heart on which rests a crown. 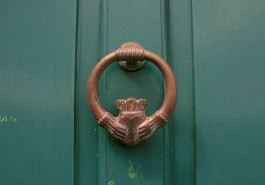 The meaning of each element is traditionally described as follows:

The three emblems come together in the phrase: 'Let friendship and love reign'.

How to wear your Irish ring

In addition to carrying these symbols, Irish rings also give out certain messages about the wearer's romantic condition. These are popularly known, so be sure you are giving the right signal!

If you are courting, but not yet at a committed stage of a relationship, you should wear your ring on your right hand with the heart pointing towards your nail. This suggests that your heart is still looking outward for love.

Claddagh engagement rings are also worn on the right hand, but at this stage the ring should be turned around so that the heart points inwards, towards your wrist (and, in symbolism, towards your own heart).

On marriage, an Irish ring is worn on the left hand with the heart pointing inwards. This gives the message that you are in a happy marriage, and enjoying the friendship, love and loyalty of your spouse.

The Claddagh (Irish = An cladach, meaning the stony shore) is an old fishing village just outside Galway City where the river Corrib opens out to the Atlantic.

This was the area where the Irish ring is believed to have been designed. It was a fiercely independent area, with its own king, and once prospered through trade with Spain.

Its fishing fleet, made up of traditional sailing boats called 'hookers', is now much diminished in number but is remembered each year in an ancient ceremony known as the Blessing of the Bay Festival.

Dating back to 1488, it is believed to be the oldest tradition in Ireland, and involved a Dominican priest blessing the boats at the start of the herring season.

On a mid-August Sunday, the modern-day ceremony sees all manner of yachts and other small craft sail into the Bay to join the few remaining hookers. A Dominican priest is then taken out into the Bay on a hooker to perform the blessing. He rings a bell as a signal for the local choir of altar boys to sing, and all the boats then make a tour of the Bay. 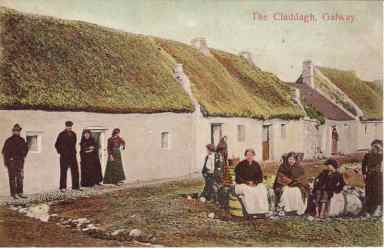 Little remains of the old Claddagh of thatched white-washed cottages that once lined the quay. The perceived romance of such a simple life was probably very different to the reality and the unsanitary homes were finally demolished in the 1930s.

Today the area is popular with tourists and strolling locals enjoying the fresh sea air and superb views across Galway Bay.