Bailey's Irish cream cheesecake is one of the world's dreamiest desserts. Its deserved fame belies the fact that Irish cream, the liqueur that adds its touch of luxury, was invented only 30-odd years ago. It came about when R & A Bailey found a way of bringing together the two great Irish traditions of distilling and dairy farming. 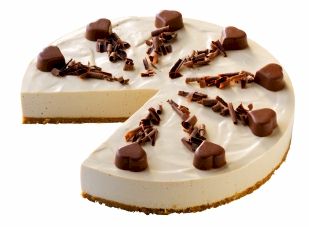 Serve with all the ceremony and aplomb that a Baileys Irish cream cheesecake deserves!

The whiskey and cream drink that resulted soon acquired great popularity and it was only a matter of time before chefs started adding it to their favourite recipes. And so Baileys Irish cream cheesecakes (and a host of Irish cream cakes, tarts and puddings) were conceived, much to the delight of our tastebuds.

Of course, only the brave and the thin should dare calulate the calories, but for utter indulgence and an occasional scrumptious treat, they can't be beaten.

The recipe below is a seriously easy version that involves no cooking and no gelatine.

And it takes just ten minutes to prepare.

The only hard part is the three hours wait while it chills in the fridge!

Ingredients for a 9-inch cheesecake:

Gently melt the butter in a saucepan. Add the crushed biscuits and mix until the butter has been absorbed. Remove from the heat.

While it's still warm, press the mixture (using the back of a spoon) into the bottom of a lined 23cm/9inch springform or flan tin. Leave to set for one hour in the fridge.

Variation on the theme!

Try my exclusive recipe for a super delicious Bailey's Cake.

It's a simple-to-make and simply scrumptious sponge that's been much appreciated as a birthday cake, but also wins plaudits as an afternoon tea cake.

In a bowl, whip the cream until it forms soft peaks.

In a separate bowl, beat the cream cheese until it is soft. Beat in the icing sugar and a shot of Baileys. Fold in the whipped cream and three-quarters of the chocolate. When the mixture is smooth, smooth it evenly onto the biscuit base.

Refrigerate and allow to set for at least two hours. If you can bear to leave it overnight, so much the better.

To serve, remove from the tin and decorate. You can either sprinkle the remaining grated chocolate over the top for a simple finish, or add some individual chocolates and flakes for a more elegant and ceremonial dressing.

Some people serve individual portions with additional cream, poured over or
whipped into a peak. Personally, I don't think this is necessary as this Bailey's
Irish cream cheesecake is already fabulously rich.

Variation on the theme!

Try my exclusive recipe for an absolutely delicious Bailey's Cake.

It's a simple-to-make and simply scrumptious sponge that's been much appreciated as a birthday cake, but also wins plaudits as an afternoon tea cake.

Whiskey, the water of life

The first authentic record of Irish whiskey appears in the Annals of the Four Masters in 1405. It states that the chieftain's heir, Risteard Mac Raghnaill, died on Christmas Day of a 'surfeit of aqua vitae', meaning 'water of life'.

A footnote was added by a witty scribe: 'Mine author says it was not to him aqua vitae, but aqua mortis.'

If you fancy a lovely cake with a nice moist texture (courtesy of this 'water of life'), try my scrumptious Irish whiskey cake recipe.