Below are brief details of the Irish counties that begin with the letters F to L, that is from Fermanagh to Louth.

The nicknames given are principally used in relation to sport, especially those sports under the auspices of the Gaelic Athletic Association, but many of them are also used in daily speech outside of any sporting context.

In Irish, the county is called Fir Manach, meaning the Men or Tribe of Manach. It is in Ulster province and is one of the six counties of Northern Ireland (UK). Its county town is Enniskillen. 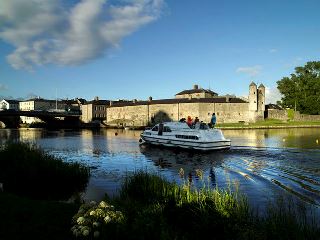 Overlooking the River Erne in Co Fermanagh, Enniskillen Castle was built in 1428 by Gaelic Maguires

Based on 1890 records, the most common surnames in Co Fermanagh include Maguire, McManus, Dolan, McGovern, Johnston, McHugh.

It is the only one of the Northern Irish counties to NOT have a border with Lough Neagh, the biggest freshwater lake in either the UK or Ireland. This is more than made up for by Upper and Lower Lough Erne which cover one third of the county. No surprise, then, that Fermanagh is known as Lakeland County.

The survey for Griffith's Valuation was conducted in 1862.

In Irish, the county is called Gaillimh, meaning 'stony', describing a river. Galway is one of the five Irish counties that make up Connacht province. Within its borders is the wild and beautiful region of Connemara, and Lough Corrib, the largest lake in the Republic. The Aran Islands, the original home of Aran sweaters, are in Galway Bay. 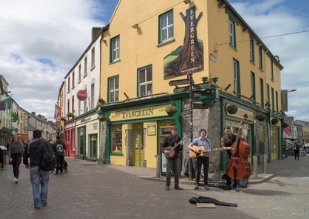 The county town, Galway City, is the third largest in the Republic. It is part of the Gaeltacht (Irish-speaking areas), and renowned for its traditional culture, especially Irish dancing and Irish music. There seems to always be a busker or two performing in the main streets.

People from Galway are referred to (especially in sporting connotations) as the Tribesmen or the Herring Chokers.

Griffith's Valuation was carried out in 1855.

In Irish, Kerry is known as Ciarraí, meaning the Descendants of the tribe of Ciar. County Kerry, Ireland's very own Kingdom, is in Munster province and is world famous for the fabulous scenery of the Lakes of Killarney. 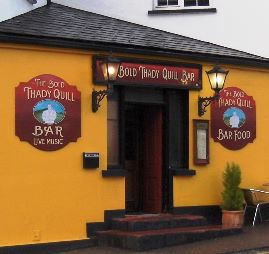 While many tourists stay in hotels in the principal towns of Tralee, Killarney and Kenmare, a significant proportion opt to stay in quintessentially Irish country cottages overlooking mountains, lakes or sea.

The town of Dingle, on Dingle Bay, is the most westerly of Ireland's mainland, and another hotspot for Irish tourism.

Richard Griffith assessed Kerry for his land survey and Valuation in 1855.

In Irish, Kildare is called Cill Dara, meaning Church of the oak.

Located within Leinster province, it is the flatest of all Irish counties, a feature that makes it perfect for horse racing; the Irish Stud and the Curragh, where the Irish Derby is held, are both in Kildare. Close by are the century-old Japanese Gardens. The county also contains most of the Bog of Allen, the world's largest peat bog. 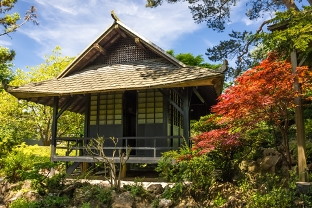 The Japanese Gardens in Kildare.

Locals bear the nickname of Lilywhites, on account of the pure white background of Kildare's flag, while their county is often referred to as the Thoroughbred County.

The land and property survey of Kildare for Griffith's Valuation was carried out in 1851.

The Japanese Gardens in County Kildare.

Locals bear the nickname of Lilywhites, on account of the pure white background of Kildare's flag, while their county is often referred to as the Thoroughbred County.

The land and property survey of Kildare for Griffith's Valuation was carried out in 1851.

In Irish, Kilkenny is called Cill Chainnigh, meaning Church of St Canice who established a monastery in the county town of the same name in the 6th century. A Church of Ireland cathedral now occupies the site; completed in 1285, it is the second-largest medieval church in Ireland. 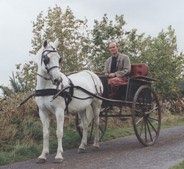 Taking the air on Brandon Hill above the town of Graiguenamanagh, Co Kilkenny

The county is in Leinster province but used to be part of the old Gaelic kingdom of Ossory, an independent buffer state between Leinster and Munster.

While the county is often referred to as the Marble County on account of its blue limestone quarrying industry, Kilkenny folk are nicknamed the Cats.

Richard Griffith surveyed the country for his island-wide Valuation of land and property in 1849-50.

The word Laois (pronounced 'leesh') is the same in English and Irish. In Irish it means Lughaidh Laeighseach, a chieftain. 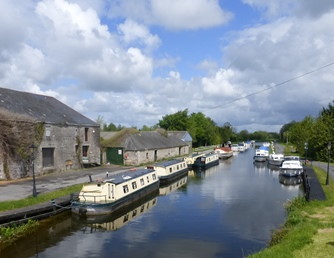 Vicarstown is on the Grand Canal in County Laois

Vicarstown is on the Grand Canal in County Laois.

You may come across many genealogical and historical records referring to Laois as Queen's County, named after the English Queen Mary Tudor who was responsible for 'planting' this area with her supporters in 1556. The county town is Portlaoise.

Grand houses and gardens worth visiting include Abbeyleix, Roundwood and Emo Court. The town of Mountmellick is also interesting. It was founded in the 17th century by Quakers and grew prosperous on the cotton, Irish linen and wool industries; in 2019, Mountmellick embroidery was officially recognised as an Irish cultural tradition.

Surnames associated with Co. Laois, based on 1890 records, include Dunne, Delaney, Conroy, Lalor, Phelan and Fitzpatrick.

Griffith's Valuation was carried out in Laois in 1851-52.

In Irish, the county is called Liatroim, meaning grey ridge, which explains why it is often referred to as the Ridge County. It is divided in two by Lough Allen and has countless lakes within and on its borders. 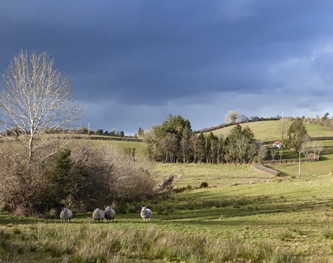 Sheep await rain in the quiet hills of Leitrim

Sheep await rain in the quiet hills of Leitrim

Leitrim is also sometimes referred to as O'Rourke County because the family of that name used to be the principal sept. This was when the county was known as West Breffni. Along with several other Irish counties, it was 'shired' in about 1585. Today, Leitrim is a quiet county, inhabited mainly by small-scale farmers.

In 1890, the county's most common names were Kelly, Reynolds, Flynn, McLoughlin, McHugh and Rooney.

Leitrim was surveyed for Griffith's Valuation in 1856.

In Irish, the name of the county is Luimneach, meaning 'barren spot of land'. Despite its name, it is a mainly farming community, but it also has hundreds of historical monuments, especially romantic castle ruins, dotted about its landscape. 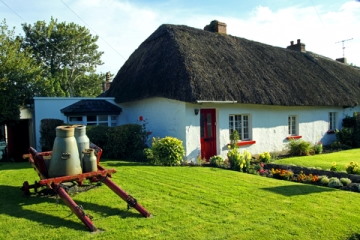 The county, in Munster province, is often referred to as the Treaty County, in memory of a 1691 treaty between the supporters of William of Orange and the Jacobites.

Its principal city is Limerick, which was founded in AD922. The city's inhabitants are called Shannonsiders, in reference to the River Shannon that cuts through the north and west of the city before racing to the Atlantic Ocean.

The land and property of Limerick was surveyed for Griffith's Valuation in 1853.

LondonDerry is one of the six counties of Northern Ireland. It is also known as County Derry. 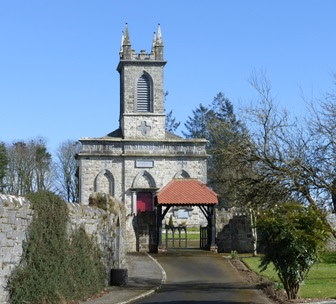 St Patrick's Church of Ireland in Ardagh, Co Longford was consecrated in 1810

In Irish, the county is called Longfort, meaning Castle or Encampment. It is a flat Midlands county, with plenty of lakes and trees, and was once known as Annaly. It was ruled over by the O'Farrells.

St Patrick's Church of Ireland in Ardagh, Co Longford was consecrated in 1810

In Irish, the county is called Longfort, meaning Castle or Encampment. It is a flat Midlands county, with plenty of lakes and trees, and was once known as Annaly. It was ruled over by the O'Farrells.

Today, Longford has the smallest population of any county in Ireland. Locals are referred to as the Slashers and a sizeable proportion of them work in agriculture or related industries.

Surnames associated with Co. Longford, based on 1890 records, include Reilly, Farrell, Kiernan, Kelly, Donohoe and Murphy.

Griffith's Valuation and land survey was carried out in 1854.

In Irish, the county is called Lù. It is the smallest of Irish counties, hence its nickname: the Wee County. 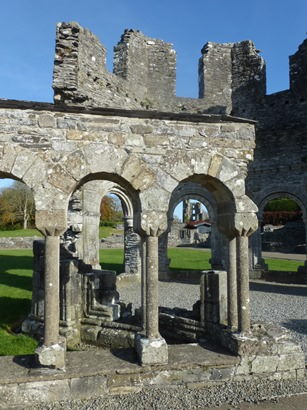 In Irish, the county is called Lù. It is the smallest of Irish counties, hence its nickname: the Wee County.

It was extensively settled by the Anglo-Normans who built some fascinating castles and monasteries. Mellifont Abbey is a beautiful but ruined example; founded in 1142 by St Malachy of Armagh, it was the first Cistercian monastery in Ireland.

More recently, Louth's population has grown enormously thanks to its proximity and relative ease of commute to Dublin. Its principal towns are Dundalk and Drogheda.

Richard Griffith carried out the a land survey of Louth for his Valuation in 1854.

How the counties of Ireland were created

► How the counties  of Ireland were created 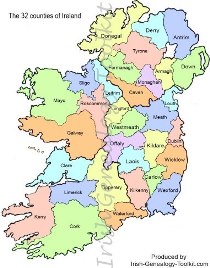