This page deals with records created since 1864 under the civil registration system. Records of deaths before that date are limited.
See church registers.

Irish death records have been collected under Ireland's civil registration system since 1st January 1864. Although registration was obligatory from the start, there were some omissions in the early years, especially in the more remote areas of the west, but probably fewer than those for birth and marriages. 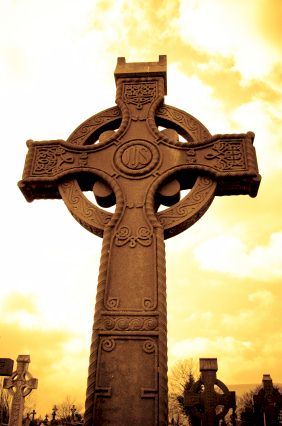 Irish death records have been collected under Ireland's civil registration system since 1st January 1864. Although registration was obligatory from the start, there were many omissions in the early years, especially in the more remote areas of the west.

Even so, Ireland's civil death records are considered reasonably complete since the last quarter of the 19th century.

This page deals with records created since 1864 under the civil registration system.

Records of those who died before that date are limited. See church registers.

Unfortunately, the death certificates of our Irish ancestors provide relatively little of value compared with the genealogical treasures of birth and marriage documents. Surprisingly, it was not until 2005 that the authorities decided it was time to start adding important details such as parents' names to ensure the deceased could be identified from another with the same name! See Details recorded in an Irish death register below.

Prior to this, Irish death records show no date of birth for the deceased and no familial connections except in those cases where the person reporting the death was a relative.

Another irritant is the tendancy, especially before 1908, for the stated age to be wildly wrong, sometimes by as much as 15 years.

This may not be entirely a matter of vanity or deliberate falsehood (although 'getting one over' on the authorities was a distraction for many in the 19th century).

Truth is, many people were genuinely unsure of the year they were born – no one over the age of 46 in 1910 had a birth certificate – so deaths were regularly recorded showing ages that have been rounded up to the nearest decade or so.

Despite these limitations, locating Irish death records has its place in your family history research. It is good genealogical practice to 'kill off' your ancestors, if only to save you wasting your time searching for a life story that had already reached its conclusion.

And there is also the chance that a death record will throw up a surprise. Perhaps an address that hasn't previously been noted, the married surname of a daughter, an unexpected occupation, or the name of some other 'long-lost' relative you either didn't know existed or thought had emigrated.

Where to find Irish death records

To comply with data protection concerns, the General Register Offices of both Ireland and Northern Ireland, allow only 'historical records' to be made available to the public online.

Historical records are deemed to be :

Marriages: Up to 75 tears ago

Your first port of call for Irish death records is likely to be the online civil registration databases. These are maintained by

See the main Irish civil registration page for an overview of how to use the indexes to obtain copies of death certificates.

Researchers looking for records of deaths that took place in the six counties of Northern Ireland should take advantage of GRONI's family history database where they can search the indexes for free and view transcriptions and copies of death certificates for a very reasonable fee. See the Northern Irish death records/indexes page.

Irish family historians rarely need to cough up for a legal copy of their ancestor's death certificate.  You can get one, sure, if that's really what you want - follow the instructions at certificates.ie or GRONI's Death Certificate Online Ordering Service.

But a legal/official copy isn't required for most genealogical purposes. Family historians need only the information noted on a copy of the register entry.

Online, images of these register entries can be viewed as follows:

Deaths 1878-1921 anywhere on the island - free at IrishGenealogy.ie

Deaths 1922-1968 in the Republic of Ireland - free at IrishGenealogy.ie

Offline, Irish death records can be obtained as follows:

Deaths 1922-Current/Recent in the Republic of Ireland - obtain photo copies (Research Copies) from GRO in Roscommon or the GRO Research Room in Dublin. Fee €4 - €6.

Purchased from the GRO in the course of my own family history research and before the advent of any free online images of death register entries, each image below shows a Research Copy:

This is the death certificate of my gt gt grandfather, George Francis Nichols, who died on 18 January 1920 at his home in Wicklow. He was a widower and was recorded as aged 75. If correct, this would mean he'd been born in 1845.

His son, James, who was present at the death and reported it, would have given this age as a guess because George himself seems to have been undecided exactly when he was born. In the 1901 census he had calculated his age from a birth year of 1846 but in 1911 he decided it should have been 1844.

George died from cardiac failure. As there is no 'duration' stated on the certificate, it would appear he suffered from a heart attack. However, there was no post-mortum so his heart condition had probably already been diagnosed. His son, James, who lived in Wicklow, reported his passing six days after the death, which was duly registered by Assistant Registrar Ida Halpin, in the Registrar's District of Wicklow in the Poor Law Union of Rathdrum, County Wicklow.

The Wicklow People reported news of his death and funeral, confirming some of the assumptions made from his death certificate were correct. He died while his daughter was preparing dinner, hitting his head on a chest of drawers as he fell to the ground. However, the report says nothing of any illness, instead suggesting he was in reasonable health and fitness for a man of his years.

Just a matter of a few days before George Nichol's death, his brother-in-law James Doolittle passed away at Wicklow Infirmary. James was an unmarried seafarer from Wicklow. Like his father and some of his brothers, he had been a member of the Wicklow Harbour Board.

Born in 1856, he died on 11 January 1912 having suffered from Tubercular disease of the Intestines for ten months and Asthema for his final month. One L Murphy, a nurse who was present at his death, registered his demise the following day.

Mary Santry, the widow of a labourer, died in County Cork on 10 July 1875. Having survived the famine, she nonetheless ended up in the workhouse 30 years later. Her death was registered by the Chief Resident Officer of Clonakilty's Union Workhouse just under a month later (and just in time to avoid a fine for late registration).

The stated cause of death, 'Senile Decay', is common for the elderly and is assumed to mean a general decline in health for an undiagnosed condition.

One of the great values of Irish death records is that they contain details of people who, like Mary Santry, do not appear in any other sources. Even allowing for an exaggerated age, Mary was probably born at the end of the 18th century and is likely to have wed long before civil registration started. Her birth and marriage pre-date most church records, too. It is highly likely this register entry is the only written proof of her time on earth.

Researchers looking for civil records of deaths that took place in the six counties of Northern Ireland should take advantage of GRONI's family history database where they can search the indexes, and view transcriptions and copies of the death register entries for a reasonable fee.

The online database carries Northern Irish death records from 1864 to 50 years ago.

However, if you can visit Belfast personally (or can get someone to visit for you), the offline databases at GRONI and PRONI can be accessed without date restrictions, right up to the present. See the Northern Irish death records/indexes page.

The information recorded on an historical Irish death certificate is as follows:

Registrar's reference (which you can ignore)

Certified cause of death

Informant's signature, relationship* to the deceased, and address.

*Where the informant is the spouse, the relationship is often not recorded.