Traditional names for boys in Ireland
conjure up colour, music and legend

Traditional names for boys in Ireland
conjure up colour, music and legend

Don't bother looking for Irish baby boy names starting with the letters Q, V, W, X, Y or Z. There aren't any. Simple reason.... the traditional Irish alphabet doesn't include these letters (nor J or K). 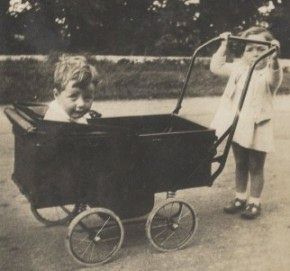 Uncle Paddy lets his big sister take him for a ride.

At one time, there wasn't even a letter P, which means that Pádraig (Patrick), surely one of the most popular and well-known of Ireland's boys' names, would have been a troublesome name for the early Irish! It probably sounded very different until the late 1600s.

Since then, Pádhraig/Patrick has evolved and must now have more diminutives or abbreviated versions than any other single Irish name. Take your pick from Paddy, Patsy, Patty, Pat, Packy and Porrig in English, and Pádhraic, Páid, Páidí, Páidín, Paití and Parra in Irish.

In my own immediate family, we had three Patricks: my uncle Paddy, my father Pat, and my youngest brother Patrick. There was no confusion because each stuck to the version originally chosen. But the thread of any discussion became a bit tricky to follow when other friends or relations called Patrick (and there were plenty of them!) were thrown in to the conversation.

Perhaps the very success of the name was the reason it fell from favour in the late 20th century. It has picked up again since. The official list of the top Irish baby boy names for 2012 (see link in Related Pages box, left) showed it was only just outside the top 20 names in the Republic of Ireland.

Patrick, along with Philip and Timothy, tended to be the names chosen by the less well-off, regardless of religion, during the 18th and 19th centuries. Redmond and Rory were more likey to be Catholic. Sylvester, Theobald and Tirlough were often conferred on the infants of prosperous Catholics, while Paul, Percy, Ralph, Richard, Robert, Samuel and Saul were names preferred by Protestants.