Irish baby girl names have moved on from Mary and Bridget.

Irish baby girl names have moved on from Mary and Bridget.

(Republic of Ireland only) 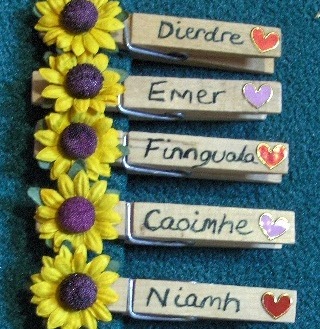 Some of the Irish girls names you're likely to encounter in primary schools in Ireland.

Modern Irish girls names are dramatically different to those chosen for newly-born infants when the civil registration system started recording them in 1864.

The top ten in 2007 showed that only Sarah had survived the passing of 150-plus years. If you take a look at my research into Irish first names in 1864, you'll see that Sarah took the No.9 spot back then.

Perhaps the biggest change in the last 150 or so years is that the parents of one third of all infant girls in Ireland no longer select Mary. Yes, that's right! Back in 1864, one in three girls was called Mary.

Poor old Mary has had a good innings, and still retains a high spot as a middle name, so she'll probably be recognised as THE architypical Irish girls name for many years to come.

Another significant feature of 21st-century lists of Irish girl names is the appearance of so many traditional Irish names. I'm talking about names in the original Irish version. Examples include Aoife, Caoimhe, Eabha, Niamh and Roisin which were the options chosen for 1,228 little colleens born in 2013.

In 2020, examples were Fíadh, Meabh, Clodagh, Saoirse and Eimear.

These are Old Irish names, drawn from Celtic history or from the Celts' Gaelic language. However, it is noticable that Irish names have experienced a drop in popularity since the first decade of the 2000s. They remain popular, and as such still rightly feature in listings of modern Irish girls names. But they are now being given to babies at only about half the rate of the Celtic Tiger years when the Republic of Ireland was enjoying an economic boom and confidence boost.

You can find out more about traditional Irish girl names and their meanings by following the links in the Related Pages box at the foot of the page.

While the most popular Irish boys names have continued to draw on the bible for inspiration, modern Irish names for baby girls do not.

The influences are much more varied and much more exotic, suggesting that Irish parents are prepared to express their imagination when naming their daughters but prefer much more 'solid' and 'trusted' monikers for their sons. 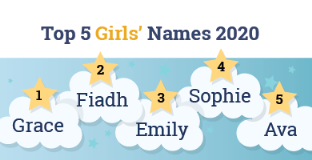 Modern Irish girls names in Ireland in 2020. From cso.ie

These numbers count different spellings as distinct names ie Caitlin is counted as a distinct name from Katelyn.

For the first time since records began, Grace was the most popular name for new-born girls in 2020.

Emily had been the number one name since 2011.

For the first time since records began, Grace was the most popular name for new-born girls in 2020. It held first or joint-first position in 12 areas of residence including South Dublin.

Fiadh was the second most popular name nationally but was the top girls name in Munster. Fiadh held the top or joint top name in five counties and shared first place with Grace in Kilkenny.

Sophia was the top name in Dublin City yet nationally it was ranked 18th.  Freya ranked 24th nationally but was first choice in Waterford City. Ellie, the 13th most popular name, was the most chosen name in Monaghan. Hannah and Isla were tops in Donegal. In Meath, Ava was the name most favoured. Although Maisie ranked 57th nationally it held top spot jointly with Sophie in Longford.

The lists below show that the top Irish baby girl names in each of the regional authorites has changed in the last 22 years.

All Republic of Ireland: Chloe

All Republic of Ireland: Emily

All Republic of Ireland: Grace

All Republic of Ireland: Chloe

All Republic of Ireland: Emily

All Republic of Ireland: Grace


The 50 most popular modern Irish girls names (Republic of Ireland, 2020)

2020 is the most recent year for which statistics are available from CSO.ie (July 2022)